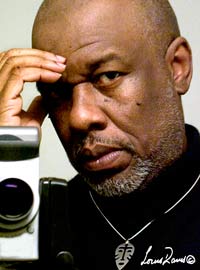 I refer to my work as ‘digital constructions’, which is using the computer to create near reality single images from disparate bits and pieces of my own photography. But my art pre-dates computers as back in my birth island of Jamaica, I had been creating strong, powerful, single and multi-layered images sans computer.

I look at the world around me, the inequities, the ‘disbalance’ of societies, the necessity to re-programme myself to survive and even attempt to change a world that has become increasingly hostile to itself.

My work is generally themed around a whole slate of social causes, which includes the environment, nationality, gender, race, religion, homelessness, poverty, exploitation, sexual orientation, discrimination. My work exhorts viewers to look at the world around and even examine themselves and their positions in regards to the positive movement of the world. My work even forces even me to daily examine my social positions and ask myself the question, “What am I doing about bettering the world?”.

My art lends its voice to the plight of the poor, the downtrodden, to those who have little or no voice in society but whom need the general public to have greater awareness of the world we all inhabit (I firmly believe that there is room for artists to address social issues). Sometimes the messages are subtle, sometimes overt, oftentimes ambiguous. At times, I do require the observer to think through a piece knowing that doing so will yield them more information and thus greater impact.

My work is always undergoing evolution but from the beginning, I was drawn to creating images ‘Beyond the ordinary’… creating images that evoke the feeling that “I’ve never thought of or seen it that way before”.