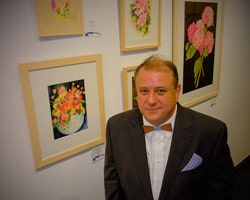 Timothy Leistner is an artist, author, photographer, lecturer and educator. He works in multiple art media and has won numerous art awards. Born in Toledo, Ohio, he has made his home in the Fort Lauderdale area over three decades. Leistner owned and directed the Artist’s Eye Fine Art Gallery from 2007 to 2015. Leistner was awarded the 2013 Broward County “Teaching Artist of the Year Award;” is the recipient of the “Joseph Leavitt Award for Commitment to the Arts;” selected as the “Faces of the Arts” in Broward County 2012; named “Best Visual Artist” of 2011 by New Times Broward/Palm Beach; awarded the 2009 “Individual Leadership for the Arts” and the 2008 “Artist of the Year for Community Impact” Award at ArtServe’s annual Encore Awards. He co-authored and illustrated the children’s book, The House Where Happiness Lived with Sue Hiser Leistner. The book is available through www.Amazon.com . Timothy Leistner is honored to co-curator of this year’s DBA CATALYST Art Exhibition along with Michael Harris.

“My concept is to encapsulate the essence of my subjects and to show them with unique representations of themselves. A consistent theme within my work is that it provides visual narratives and a glimpse into the subject’s thoughts and life. A number of my models are working artists themselves. Drawing on elements of their artwork, I attempt to depict them in relationship with their artwork or as actually becoming their art.”

Leistner’s work is often disquieting, startling, moody, and surprising. He hopes to invoke an emotional response from the viewer. Timothy Leistner exhibits his work extensively in gallery and museum exhibitions as well at as his own gallery, “Timothy Leistner/Artist’s Eye Fine Art Gallery” in Dania Beach, Fl.